There was a man in my bedroom this morning.  It’s not what you think.  He had his head up my crawl space.  Wait.  It’s still not what you think.  Stop with the *nudge nudge wink wink*.  Get out of the gutter my friends.  Join me up here on the roof instead where the wind came sweeping o’er the plains….. and proceeded to rip off several shingles and unceremoniously dump them in my yard.  And my neighbor’s yard.  Mother Nature was spreading the joy.  And why yes, I was Townsperson #12 in my high school production of ‘Oklahoma’.  Why do you ask?

It was inevitable.  I knew when I entered into Single Girl Home-Owning this roof was original to my nearly 30-year-old house.  In roof years Willard Scott should be wishing her a Happy Birthday.  Kids, Google that if you don’t understand the reference.  Anyone older than my house knows what I’m saying.  She’s cranky, creaky, and brittle.  Parts were bound to start falling off.  Hell, I’m 36 and I’m already calculating how long until a right knee replacement and if the pain in my left heel is a bone spur forming or my Achilles slowly tearing.  I empathize.  Aging is hard for both people and roofs.  But this bitch needs to hold on for at least five more years.  I’m not pulling the plug yet.  I need a roofing AED.

Which brings us to Roofer Joe in my bedroom this morning, with his ladder in the closet amongst my shoes and unmentionables, poking his head up into the crawl space to assess for moisture lines and mold and other interior damage.  Sexy, right?  Actually, Roofer Joe is attractive in an amiable sort of way.  I’m glad I got up in time to put make-up on.  I try to anytime there’s a new repair or sales guy coming on the off chance they pique my interest.  The extremely off-off chance.  I have a friend that married her Cable Guy.  You never know.  Roofer Joe even commented on my art and said he went to college for graphic design.

Oh really Joe?  Do tell.  What’s that?  You and your wife would love a place like mine for your first house?  Sooooo……  Could have slept those extra five minutes?  Son of a bitch.

Guess Joe doesn’t know a fiddler named Tevye.  And why yes, I do enjoy musical theatre. Why do you keep asking?

Since I’m not going to be throwing Roofer Joe down on my bed Penthouse Forum style now I let him take his ladder outside to assess the patchy bald spots my roof has sprouted.  Yes, my poor roof has had alopecia for almost two weeks now.  I watch him trot back to his van and reach for the clipboard.  I know this drill by now.  It’s the estimate.  The repair guys all sit in their vans to write up several “recommendations”, usually in decreasing order of cost. Dude, can we just skip to the bottom option?  The bare minimum, yes I know it’s going to nickel and dime me, patchwork, but at least it’s more than duct tape option?  This is totally not going to help my Bubbles and Budgets situation.  Instinctively I started reaching for the bubbles as soon as he reached for the clipboard.  But hey!  Speaking of said situation, I liked that 1 a.m. booty call of boxed Riesling enough I decided to try his brother!

I’m still a bit weary of the reds though.  Feels like stepping over the wrong side of the tracks straight into the biker bar….. but if I have to call a plumber too in the next few months someone better get me a leather jacket and slap a patch on.  Then I’m totally joining Mean Merlot’s Boxed Up Motorcycle Club.  I didn’t watch Sons of Anarchy for nothing.

Roofer Joe and I sat down for a lovely chat.  Since I had already made it abundantly clear a new roof was not a viable option unless it actually did involve duct tape and a tarp he was smart enough to only give me two “recommendations”.  Thanks Roofer Joe for making it easy to skip to Option #2: replacement of missing shingles and shingles primed to make a run for it.  Apparently I have to pay for a bundle of 20, so as long as it’s only a small group aiming for freedom beyond the border of the rain gutters Roofer Joe can coyote their asphalt assess right into the trash.  ¡Viva La Roofing Revolution!

Roofer Joe also informs me a few lines of 27-year-old shingles don’t appear to be nailed in place.  I don’t understand Joe, what’s keeping them up there?  Fairy dust and magic unicorn wishes?  Roofer Joe isn’t sure how they did it a quarter of a century ago, if just adhesive was an acceptable method, or if someone tried to do a little work on their own.  Yes, here at the Huh House I’ve found it’s not out of the ordinary for a previous owner to just slap some Gorilla Glue on an issue and call it a day.  All grand estates deserve a moniker.  Mine is so named because every time there’s a repair person here the following phrase is uttered: “Huh.  I wonder why they did that?”  Don’t know dude.  Please just fix it.

This is exactly what beautiful, talented, handy Roofer Joe proceeds to do.  (P.S.  If anyone would like to pressure wash and repaint my deck I’ll fall in love with you too.)  He shimmies up there and bangs away.  Bang.  Bang.  Pause.  Scuffle.  Shuffle.  Bang.  Bang.  Oh hi, remember that gutter?  I know you’re back in it my friends.  Unless you’re cleaning out the leaves, please crawl out.  Join me for coffee as I await the gulping moment I hand over my check card.  It would have been nice to purchase some new underwear with functioning elastic with that tax return but hair plugs for the roof it is.  It’s important to keep the domicile’s dome intact.  I can go commando.

“Recommendation” #2 ends up costing $500.  And $2.  Cant’ forget the $2.  I’m still trying to decide if the $2 is a slap or a punch line.  I’ll get back to you on that one…..  Roofer Joe shows me some pictures he took while up there and explains my existing shingles are so faded from age he couldn’t really match the color.  My shingles apparently forgot to dye in their age-defying Clairol.  Now my roof is like that hooptie car rolling by with that one door the wrong color.  I prefer to think of it as ‘pops of color’.  The roof now has character.  It matches the character of my own soon-to-be-crossing-into-hooptie-status vehicle, what with that zipped tied front bumper and all.

Out of curiosity I ask Roofer Joe to ballpark a new roof for me.  After some slight sputtering about not being a sales guy he tells me probably about $10,000 with the extra attic ventilation and things I should have to do it right.  I’m not looking to slap some Gorilla Glue on it and walk away but Holy Shit and other expletives.  I know it’s going to be at least $5K.  Apparently $10K to $15K for all the bells and whistles extras like “least likely to grow black mold in your rafters”.  Is someone finding me that leather jacket for Mean Merlot’s Boxed Up Motorcycle Club?  Or if anyone would like to gift me $10K for Arbor Day….  What’s that?  Oh, that’s not a gift bequeathing holiday?  Besides the gift of life sustaining oxygen that is.…  Okay.  Guess I’ll stick with leaving the leftover shingles from the bundle in my basement.  It’s 10% off the next call out if the supplies are already here. 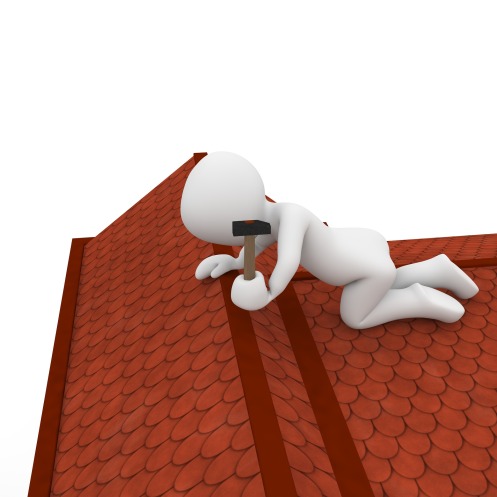 17 thoughts on “Ladies Night at the Shingles Bar”