I didn’t know you could buy a pregnancy test on sale.  Huh.  You can even earn CVS Extra Care Bucks.  Apparently it’s a lucky day for my budget.  Maybe not so much the muted panic that’s risen every day my stubborn uterus refuses to shed her lining.  She’s a part of me so I guess I shouldn’t be so surprised she’s all Aries Fire Sign obstinate.  But seriously?  It’s Day 35.  I’m not all Swiss Clock Engineering regular since I weighed the pros and cons and gave up the hormonal birth control but it’s rapidly approaching a full week late from norm.  Each night that passes I throw a little plea towards Mother Nature Menses to think like a snake and shed already.  She has not been listening.

I am officially a week late and it’s been three weeks since the 5 a.m. slumber induced haze of limbs and lips that had me abandoning all Single Girl Smartness.  I let Tiny Logic Person sleep in her military cot with tucked in corners, clipboard resting on the nightstand, and never even paused to send the Trojan troops in.  Never once considered an armament.

I KNOW.  Save the tsking and the judgy glances.

At this point my sex life is old enough to be drafted into the army so we both should know better, my amorous uterus and me.  Go ahead, do some math.  I’ll wait.  Yet, here we are.  This time it’s not merely a What if? contemplation on my way to the dairy aisle.  This time it feels like DEFCON 2 War Games style, only Matthew Broderick isn’t around to save the day and look all nerdy cute.

Three weeks ago I propositioned and I pushed like a Carnal Carnival Barker, seeking a lusty 1 a.m. trip through the Funhouse, seeking a break from the monotony of a solitary bed.  I deployed the trusty Trojan soldiers.  Tiny Logic Person insisted.  Then I should have gone.  I should have stuck to my own rules, slid my boots on, and gone on my merry way.  But I didn’t.  I stayed, seeking a different solace, reveling in the nearly foreign familiarity of arms wrapped around me, twitching a few myoclonic spasms as he drifted off.  This man I am not dating.  We are not regular lovers.  We aren’t even really friends.  We are acquaintances who have, on occasion, shared a moment in each other’s beds.  I keep going back because the sex is fun and carefree.  I go back because he feels familiar.  Since the first time I kissed him it’s felt like something I’ve been doing for years.  Perhaps we did in another lifetime.  Perhaps it’s meditative bullshit.  Either way, I stayed.  When he reached for me at daybreak I acted on pure instinct.  I waved good-bye to Single Girl Smart’s 4.0 GPA and left Tiny Logic Person and the soldiers snoozing in their encampment.

So, now, three weeks later and a week late, I’m staring at the yellow Sale (!) sticker slapped on an E.P.T box.  There’s an economy box of 20 I marvel at until I realize many women actively plan their pregnancies.  Silly me.  The box of two shall be just dandy.  Maybe there’s a nice chastity belt over in clearance?  Oh, who am I kidding?  I’d leave that in the back of the closet behind a few leftover bridesmaids’ dresses and my homemade fairy costume.

I tell exactly one person about my purchase and my growing unease.  It’s not my 5 a.m. companion.  We are not together.  We are not a team.  He’s not going to be holding my hand as we wait for an egg timer to ding a la every cliché “Oops! You’re Pregnant!” Hollywood movie.  If it’s positive, we’ll have a discussion.  If it’s positive, we still won’t be a team, a couple against the world.  This isn’t a screenplay.  We’ll just be two people that made a baby.  If it’s negative….  Well, who wants to be the girl who cried “Baby!”?  Single women around the globe hold their breath alone every month, waiting for Mother Nature Menses or an egg timer ding, to exhale.  I had a week where it was barely a hitch in the back of my mind.  Another week when I waited patiently.  Then another day.  Another.  And another.  My lungs are full, my face is blue.  I need to exhale.

I tell myself to wait until morning.  Day 35 is still an outside normal variance.  Don’t panic until Day 36.  Don’t panic.  But I need to exhale.  And I need to make a choice in my head so panic isn’t an option.  If it’s positive I need to have already decided my course, long before I let go a stream on that stick.

It’s four days before my 36th birthday.  As I’ve said before, I’ve never really gotten the maternal stabbing pang in my womb to carry and bear a child.  The running joke is I’d love to adopt a potty trained 4-yr-old.  There’s never been a flashing neon countdown.  Except… maybe there’s a tiny alarm built into the combo clock radio on the windowsill….  When I was 18 I declared I wouldn’t consider children until at least 30.  When I was 18 I didn’t know I would still be single, staring down the short barrel of remaining fertility.  I didn’t even have a Starter Marriage like is all the rage these days.

I’m not going to settle now in order to procreate.  It’s not a blaring alarm, but somewhere, far in the back corners of my mind, are a few boxes marked “Things I Never Said Out Loud”.  In there is shoved the belief I thought I would have at least one child by now.  Instead, I’m sitting at my dining room table by myself, flipping a 2-pack of HcG-detecting sticks back and forth between my hands, thinking about how to afford $200 a week for daycare on my Single Girl Income or if my retired German neighbor might agree to a watch a baby for less.  My kid would at least be bilingual.  I absolutely believe in Roe V. Wade, but sitting here, a few scant days closer to 40 than 30; I know it would not be my personal choice now.  Maybe at 19, the last and only other time I waited for a proverbial egg timer to ding, perched on the tub ledge of my childhood home, it would have been an option.  It was negative back then so I did not have to choose.  Maybe at 19, if I’d gotten the little positive sign, I would have chosen an open adoption.  Those were hard choices I didn’t have to make.  But not now, here at this table, 17 years later, faced with the mounting possibility of having to turn the guest room into a nursery.

So I make my choice.  If it is positive I will have a very hard, Adulting, conversation with my affable acquaintance about impending fatherhood, whether he wishes to be active or not, about expectations or lack thereof.  If it is negative … Well.  Then I pour some wine.

I take my little purple box to the master bath and skip the directions.  I know it’s been 17 years, but how hard can it be?  You pee on a stick.  You wait.  Sounds idiot proof to me.

Turns out I’m the idiot that can’t be proofed.

And I tilted the damn stick up.

I JUST FAILED AT PEEING ON THE ACTUAL STICK CORRECTLY.

My frustrated growl of “OH! COME ON!” reverberates through the house, causing the cat to flee down the stairs.  I have no urine left now.  The well is dry.  I read the directions.  I have one stick left and I’m doing this right.  Plus, the sale probably ends soon.  I vow to wait until the first morning release like all the whisper down the lane, old wives’ tale advice suggest.

Patience is not my middle name.  It’s a fitful night.  I may have made a tentative decision in my head but my lungs are still waiting to exhale.  I wake to find no signs of a cooperative, shedding uterus.  I shake Tiny Logic Person awake and snap to get her clipboard.  We’re doing this by the book.  Well, by the tiny pamphlet and Goggled instructions that are easier to read than said pamphlet.  This time I hold the tip down for a count of 5 one thousands, keep it pointed down as I transfer to the sink and replace the cap.  I gingerly place it flat on the counter and wash my hands.  I may have failed at peeing on the stick last night but I was successful in getting it all over my hands this morning as I tried to keep that damn tip pointed down.  I retreat to my bed, setting my phone alarm for two minutes, and watch the ceiling fan circle lazily.

It is negative.  It. Is. Negative. 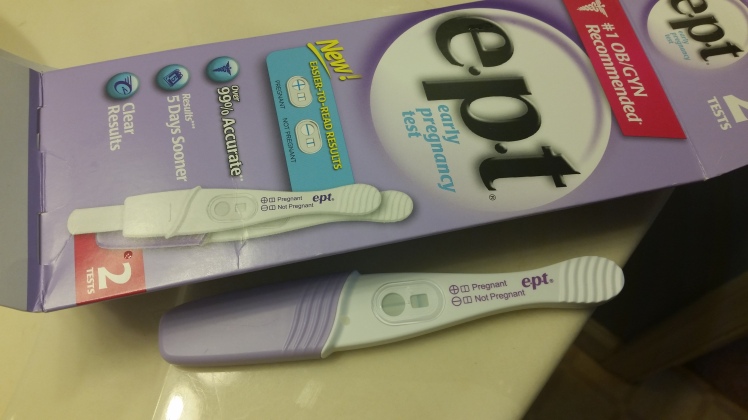 I exhale.  Loudly.  I empty my mind and my shoulders and my lungs.  I pour a glass of wine for breakfast.  Single moms can’t do that.  Nearly 36-yr-old single women with a negative pregnancy test can.  A semi-sweet Riesling pairs well with eggs and side of hashed relief.

My 5 a.m. companion is not the man with whom I should share spawn.  He’s a good, fine man.  But he’s not my man and will never be.  Still.  There’s a residue left in the corner, a small token of regret.  A realization time is indeed marching past the intersections where my choices might lead to cribs and grade school plays and the very celebrated creation of life itself.  Yes.  I hear the Lion King soundtrack too.  Elton is warbling Circle of Life in my head and that monkey is holding up the little lion cub for all to see.

The crossroads ahead are more likely to be named Dad’s Cool Girlfriend or Dad’s Interloping (insert expletive here) Girlfriend than Mom.  Or I make no turns and continue straight on Avenue Me.  Magic 8 tells me “outcome is uncertain”.

Five hours later on Day 36 my uterus finally antes up.  I swear that bitch just wanted to test me.